Veppo Doubles Down on BigCommerce After it Smokes the Competition

See first-hand the features that empower businesses
like Veppo to grow with BigCommerce. 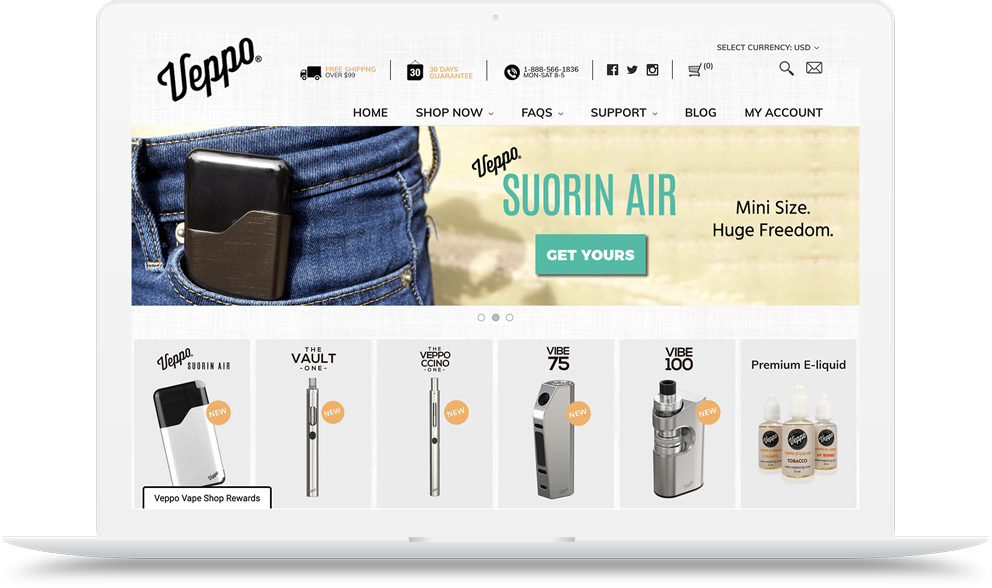 the cost to run a store on Shopify Plus vs. BigCommerce

months spent on Shopify Plus before coming back to BigCommerce

See first-hand the features that empower businesses
like Veppo to grow with BigCommerce.

The founders of Veppo have a passion for health and wellness. In seeing family members and friends attempt to lessen their smoking habit and then be frustrated with the quality of vaping products on the market - they struggled to find a product that was a reliable, tasteful and pleasant alternative.

For these reasons, they set out to create the ultimate device by sourcing premium components and liquids to concoct a harmonious balance in taste, flavor and usability.

Veppo Vape Shop’s products hit the market on BigCommerce with immense success, and they believed they needed to graduate to a more robust subscription plan to keep up with sales.

BigCommerce was the company's top choice in order to scale the business, but the founders also saw an appeal to Shopify due to its market presence.

Veppo chose Shopify Plus believing it would be a more intuitive, user-friendly system. However, within four months and tens of thousands of dollars later, the company was back on BigCommerce.

Buyer's remorse due to lacking features, higher costs on Shopify Plus

Like many companies, we wanted to utilise an ecommerce platform that would make it easier to sell our products. We strive to create an unparalleled customer experience by truly connecting with our customers and offering a streamlined transaction process.

We originally landed on BigCommerce, but along the way, we decided to consider Shopify Plus, for two reasons:

1. We believed the ability to sell subscriptions and auto-refill would enhance our customer experience and convert existing customers to repeat customers

2. The Shopify name is highly marketed and endorsed.

However, after a lot of time and money spent across all sectors of our company, we were disappointed to discover that our costs increased 2x and our customer service ratings had plummeted after mistakingly making the switch from BigCommerce to Shopify.

Migrating to BigCommerce leads to happier customers and greater efficiency

Our customer service ratings rapidly declined while using Shopify Plus due to the lack of a basic cart feature: order editing.

With Shopify Plus, customer service could not easily edit an order. Rather, our customer service team had to completely cancel the order and manually create a new one. The process was labour and time intensive and caused confusion for our customers when they received multiple notifications in their inboxes.

The ability to edit orders is a basic feature we took for granted within the BigCommerce platform. Each day, we receive multiple requests from customers to change their orders and BigCommerce enables our reps to easily modify the same order with three clicks.

This process creates a more positive customer experience and helps Veppo run more efficiently. We didn’t even realize it wasn’t a feature other platforms just didn’t have.

Having a proper inventory count is essential, and with Shopify Plus, our order numbers were often incorrect because of the various apps that integrate with Shopify, but not fully.

With Shopify Plus, when inventory numbers were wrong, customers unknowingly ordered out-of-stock inventory, expecting to receive it quickly.

In these scenarios, our customer service team had to reactively reach out to the customer, explain the issue and offer a replacement or credit/refund. Then, they were required to notify the shipping department, after which the order was either placed on hold or sent out in 2 batches, both costly options.

Inaccurate inventory counts were not only upsetting to the customer, but also costly for our company in terms of revenue, time and brand trust.

BigCommerce was able to alleviate this concern and increase company efficiency and customer satisfaction.

“The ability to edit orders is a basic feature we took for granted within the BigCommerce platform. Each day, we receive multiple requests from customers to change their orders and BigCommerce enables our reps to easily modify the same order with three clicks.”

“Inaccurate inventory counts were not only upsetting to the customer, but also costly for our company in terms of revenue, time and brand trust.”

“At Veppo, we require several features that are efficient and user-friendly. BigCommerce was superior across the board.” 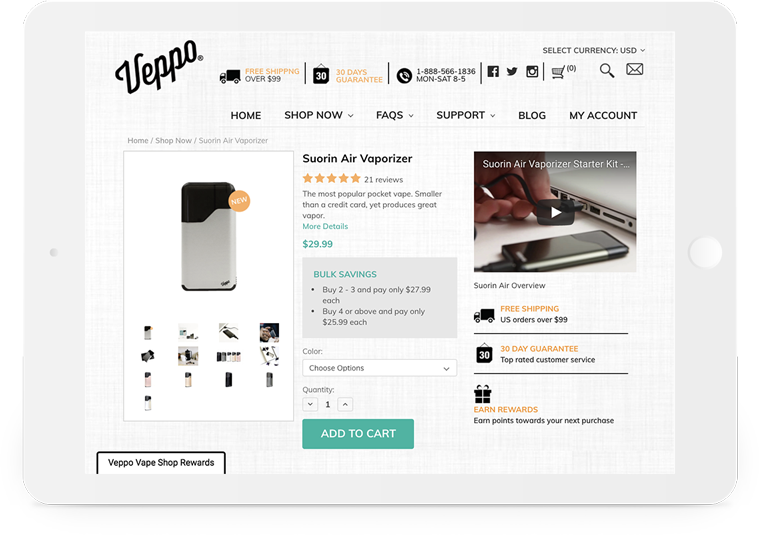 Why BigCommerce came out on top (again)

At Veppo, we require several features that are efficient and user-friendly. BigCommerce was superior across the board with features such as:

Customer credits: BigCommerce has integrated customer credits in such a way so customers can easily apply credit to their order with a single click. Shopify Plus, on the other hand, uses a gift card system through which customers personally have to keep track of their gift code to utilise their credit. Since it is not automatically reflected in their account, our representatives had to keep track of those credits.

Back-end usability: BigCommerce’s user-friendly dashboard enables us to quickly check the status of orders, sales, and order origination. Shopify Plus didn’t offer this capability, forcing us to manually count orders, customers or products.

Customer reorder ability: Our most loyal customers consistently repurchase a previous order. With BigCommerce, they can simply log in to their account and reorder with the push of a button. This capability was not available on Shopify Plus.

Integrated upsell in-cart popup: The ability to recommend additional products is integrated in most themes on BigCommerce. When a customer adds a product to their cart, a pop-up confirms the addition and recommends more products which helps increase average order value and revenue. In Shopify, there’s an app for that!

One of the main reasons we moved to Shopify was for a subscription program.

Since our customers use refillable products, we believed a subscription feature would alleviate their need to remember to repurchase their order. This feature would generate guaranteed revenue and provide us with an easier ability to forecast inventory.

However, the process was not as seamless as it was initially proposed. All subscription orders were checked out through a separate cart –– only available through a third-party provider –– which did not integrate with the Shopify coupon code system.

Where this impacted us most was with our loyalty program. Through Shopify Plus, the loyalty program generated custom individual coupon codes to be used in the cart.

However, customers were not able to use those coupon codes in the third-party subscription cart, causing a backlash from our most loyal customers who felt as if they were being deceived into using the subscription model without actually getting a discount.

Our temporary solution to this major issue was to revert to bulk pricing, which required another third-party app. Because the app created variants of the products, this led to inventory tracking issues. To solve for this, the Shopify team had to build a unique script, which took three weeks.

All of these issues wouldn’t have happened with BigCommerce, which has these features built in and provides a simple process for setting bulk pricing on all products –– as well as a native checkout even for subscription orders.

What we quickly found is that Shopify Plus relies very heavily on third party apps to provide many essential functions.

In comparison to other platforms, Shopify Plus’s built-in features are severely lacking. This forced us to install dozens of monthly subscription apps and figure out how to make them all work together. Our customers were left with a negative experience, and our business suffered greatly.

After spending $40,000 to transfer to Shopify, thousands of hours of company time, and months of organizing and reworking, we moved back to BigCommerce four months later.

Throughout our trials and tribulations, we discovered that BigCommerce has the most integrated system available and designed for an exceptional customer experience. 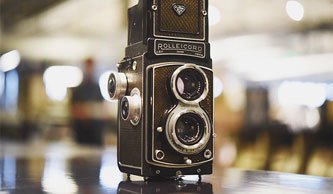 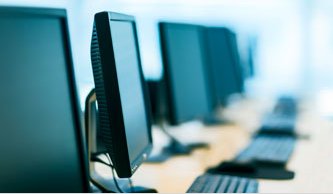 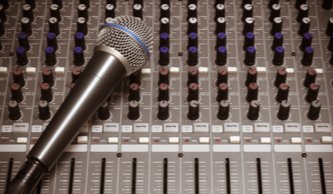